skip to main | skip to sidebar

Today, as I was organizing my writing folders, I discovered that I have eight unfinished WIPs. Yes count them eight! Holy crap what is a girl to do? When I first began this writing journey I was afraid that I wouldn't be able to come up with enough ideas but now it seems as if I have so many they are overflowing...I'm not complaining about this BTW just sayin. ;)

Anyway, this prompted me to organize my files so that I could get a better understanding of how I wanted to proceed. I made a folder for the all of the unfinished stuff and then updated my submissions spreadsheet. I have subbed three works for publication so far this year. This really amazes me because when I was first starting out I couldn't finish anything. Now I have reached the point where I have enough confidence in something to send it off to be considered for publication. Yay! Yes this excites me.

This is part of the reason I love to write so much. There are so many surprises around every corner and every one of them is essential to my journey. *happy sigh*

Well, I think I've gone on long enough about my revelations in writing. It's time to work on my WIP so I can decrease the number of files in my unfinished folder.


Thanks for stopping by.
Posted by Lauren Murphy at 8:00 AM 5 comments:

Email ThisBlogThis!Share to TwitterShare to FacebookShare to Pinterest
Labels: Me, Writing

The Rapture by Missy Lyons

The lure of a demon lover is difficult to resist, and impossible to leave, because sex is highly addictive. Sex with a demon is known as the rapture, since it brings absolute pleasure so intense that it is almost painful. But is the price worth gambling your life and your freedom?


You can read more at Missy Lyon's webiste.
Posted by Lauren Murphy at 7:24 PM 2 comments:

Piercing the Veil by RG Alexander

Here's the blurb:
Twins Hawk and Val are Fianna warriors under the vengeful curse of a scorned goddess. Following the prophecy in the Book of Veils, they search for the one who can help them retrieve the Claiomh Solais before their enemies get the chance. Their quest leads them to Linnea. One touch and there can be no doubt that they have found their match. But will she accept them once she knows the truth?

Linnea is no one special. So why is she on the run from evil faeries and her egotistical ex? Why is she suddenly spending time in the company of dragons, druids, and one kinky Viking with a split personality? All she knows is she has to keep her daughter safe from those who hunt her, and her heart safe from another betrayal.

To protect one gifted child and all of humanity from the dark god that seeks retribution, they must learn to trust each other. To have a future together, they must find the perfect balance.

Purchase at Ellora's Cave and don't forget to visit RG's website.
Posted by Lauren Murphy at 7:02 PM No comments:

The Fallen by Gwen Hayes

“The Fallen” by Gwen Hayes

As Darkfall gains a foothold in the small coastal town of Serendipity Falls, Bridget, a witch and healer, fights a battle on two fronts. Against the chaos bleeding through the fissures of a cracked portal between realms, and against her attraction to a fallen angel with his own agenda. Talon’s dark ways and mysterious magics go against everything she believes in, but he’s the only man she’s ever loved.

Talon, forever haunted by his fall from grace and his ceaseless desire for the headstrong Bridget, longs for what he can never possess. Though he is no longer her guardian, she tempts him with pleasure he can never touch and emotions he can never reveal.

Caught on opposite sides in a war between good and evil, they struggle against their mutual passion. Then an ancient prophecy points to the one who will break the portal wide open and shift the balance of power: Bridget. She has no choice but to turn to Talon, and the love that will damn their souls—or save the world.


Warning: Contains graphic sex worth falling from grace for. And a dark, fallen angel with voyeuristic tendencies—if you’re into that sort of thing.

Posted by Lauren Murphy at 7:02 PM No comments:

Song of the Sea by Cassandra Curtis

When a mafia don’s bride-to-be goes missing, Peter Varien is hired to find her. Varien, an ex-cop turned private eye, takes the job despite the warning bells going off in his head.

He manages to track down the missing woman to a nightclub in Memphis, where she’s belting out jazzy torch songs with the boys in the band. She’s every man’s desire, with a body born of sin and a voice that enthralls, putting men under a sexual spell.

But it’s a spell under which Peter is determined not to fall.

Vivilyn Ondine is having the time of her life, given the power over human men through the control she wields as a sea siren. She’s never fallen in love, never truly surrendered–until she meets the handsome private investigator.

Soon, Peter and Vivilyn are in a race against time, and must join forces to defeat a dangerous enemy who will stop at nothing, even murder, to capture Viv and force her to reveal the location of the magical pearl known as the Soul of The Sea.

But it was a good one. On April 2, 2008 I sent in my first story to be considered for publication. After impatiently waiting for months (Sorry I just wouldn't even know what patience looks like as I've never seen it before in my life) I was starting to give up hope. You know I'm dramatic. Well last night as I sat at my computer putting absolute dreck on paper (ok so it's really not terrible it's just a first draft) I saw an email notification pop up from said publisher and immediately went to check it out.

Inside was a nice R for yours truly containing the good and the bad. I mean not only did it include what was good it also told me what I need to work on, which is really the most important part if you ever want to improve your writing and get published. I was totally excited and I haven't even made it to the best part yet. She went on to say that I have a lot of potential and that she hopes that I’ll send a another story for consideration in the future. OMG YAY!!

Seriously I am so siked! The only thing better would have been to have received a reply saying that my story was the best thing since sliced bread and they couldn't wait to sign me. OK so since that didn't happen I will be more than happy to take what I got and use it to make this story the best thing I've ever written and get it out there for all of you to read. ;)

The story I subbed is tentatively called When Darkness Falls. Here is the blurb:

It has been too long since Hawk has fed and the thirst for blood has taken over. But, the delicious sent wafting from Liya's soft body stops him dead in his tracks. There is something about this woman that can make him forget even his most primal needs, and he has to know what is.

Liya encounters Hawk, she discovers the streets are no longer safe at night for humans. Even more dangerous than his fangs is his alluring male beauty and magnetic sexual appeal, awakening deep dormant desires within her. But before a love can blossom between the two, events will unravel that will test their strength and desire for each other and a dark secret that just might tear them apart.

Thanks for stopping by.
Posted by Lauren Murphy at 9:00 AM 4 comments:

Email ThisBlogThis!Share to TwitterShare to FacebookShare to Pinterest
Labels: Me, WIPs, Writing

Come Join Us for a Workshop at Romance Divas! 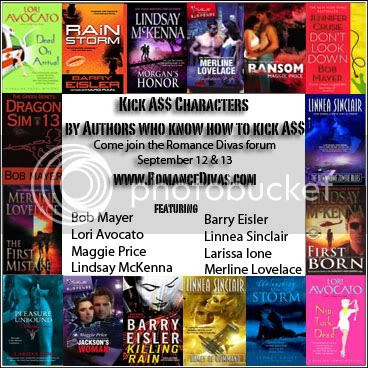 Kick A$$ Characters By Authors Who Know How To Kick A$$

Featuring:
Bob Mayer
Lori Avocato
Maggie Price
Lindsay McKenna
Barry Eisler
Linnea Sinclair
Larissa Ione
Merline Lovelace
Want to know how to write authentic action, suspense, law enforcement, and military romance? Ask authors who know firsthand! Romance Divas is hosting a 2-day workshop with some of the hottest names in the genre. It will take place at the Romance Diva Forum. All are welcome. To get access to the forum you will need to register by entering the site and clicking on Forum.
Posted by Lauren Murphy at 6:20 AM No comments:

Working on Something New...Kind of

As you are all probably aware I have been wrestling with this 60K+ story for quite some time now. Well, recently I decided to give it a rest, put it to the bottom of the stack and work on the something new. This was when I realized that I had a story sitting on my hard drive that needed my attention. I started writing this one right before I went on my editing frenzy so it was only about 5K when I went back to it.

Anyway I feel like something has magically come over me. For at least a month I've felt stale and unmotivated but since I started working on this story (ok since yesterday) I've been feeling refreshed. Like this is something I can really do. In some ways this alarms me. Don't get me wrong I love, love, love erotica but I do want to be able to try other things. But so far if it hasn't been erotica then I haven't been able to write it. *Sigh* I must ponder this as well.

Moving right along I'm not going to turn a fairly upbeat post into something dark and depressing, Ack! So, on that note I'm going to write.

Thanks for stopping by.

Lauren Murphy
Lauren Murphy is a woman who is run into the ground by her children whom she adores. After a long day at work she enjoys working out until she drops and cooking the family dinner. She tries to be productive as her children follow at her heels. Pulling at her mouse and hitting the caps lock as she tries to write her stories. Originaly from Chicago, Il she came to Nashville for school and as been trapped there since then.